Christmas in the Dominican Republic

It's warm at Christmas time in the Dominican Republic. Because there are no fir trees, the Dominican Republic has its own kind of special Christmas decorations called 'Charamicos' (which is a slang word for a dry tree branch). These started as hand made small Christmas trees made from straw, branches and bendable wood, which were painted white - to look like snow! But now you can get Charamicos in all sorts of shapes like balls, stars, angels and animals as well as trees. Charamicos can also be very brightly colored as well as white. 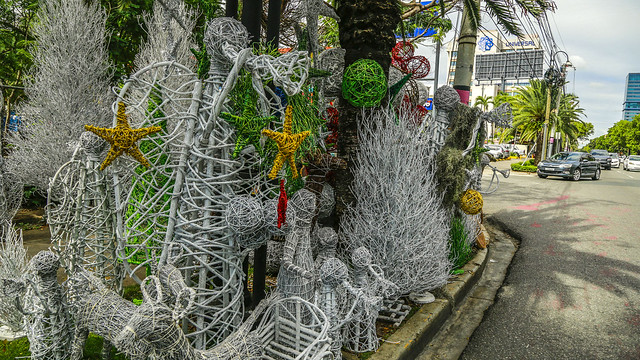 Natvity scenes, known as 'Nacimiento' are also very popular decorations. Most homes will have a scene and large scenes are put up in town and cities, in shops and government buildings. 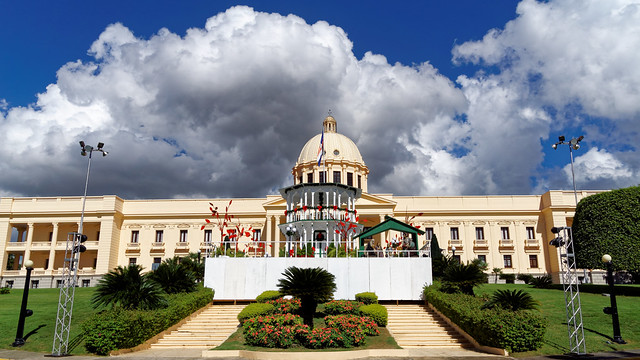 A popular way of having a party around Christmas time in the Dominican Republic is with an 'Aguinaldos'. They are informal parties, which often start in one house and move around different local houses as more people join in. There's lots of singing and dancing, as well as food and drink. A popular, traditional Dominican Christmas song is "A Las Arandelas".

The Dominican Republic has its own version of 'Secret Santa' known as 'Un Angelito' (a little angel). Names are put in a container and pulled out at random and each person will get a little gift from their little angel!

Sometimes people will be given a special Christmas bonus in their workplace. This is known as 'Double Sueldo' and can be a month's pay!

Christmas Eve, called 'La Noche Buena' (which means 'the good night'), is the main time to celebrate and have the Christmas meal. It's often a big family meal and people can travel from around the island (and sometimes back from other countries like the USA) to spend Christmas with their families.

A main dish is 'cerdo asado' (roast pork). It will often be served with 'pasteles en hojas' (which are like tamales and are cooked in banana leaves) which can be filled with pork, chicken, fish and vegetables; potato salad, salsa verde; and 'Pan Telera' (a long crusty bread). For dessert there can be sweets, cookies and cakes, 'jalea de batata' (sweet potato pudding), and turrón (a nougat with nuts in), as well as fruit and nuts.

To drink there might be some rum or wine. But another popular Christmas drink is 'jengibre' which is a warm non-alcoholic drink made from ginger root and cinnamon (it's sometimes drunk when you've got a cold or the flu!).

After the meal people like to relax and spend time with their family and friends. You might also set off some 'Fuegos Artificiales' (fireworks) at midnight. These are very popular and light up the sky on La Noche Buena and at New Year's Eve.

Some people will go to a Midnight Mass service at a local church. This is known as 'La Misa del Gallo' (the Mass of the Rooster). On the 25th, called 'Navidad', people will spend more time with their friends and family - and also recovering from the night before!

An old tradition for Dominicans on Christmas Day was not to give each other material gifts, but to give and spend quality time with family, friends and neighbors. Food and wine were the only things you were allowed to bring to a home during Christmas.

Children don't get their presents in the Dominican Republic until the evening/night of the 5th January, Epiphany Eve. They hope that the Three Kings will bring their presents. Children leave out some grass or straw for the King's camels and some sweets or mints for the Kings. Epiphany is known as 'el Dia de los Reyes Magos' (the day of the kings). In some areas as well as the Kings, 'La Vieja Belen' (the old lady of Bethlehem) might also bring you presents.

A popular Christmas children's song in the Dominican Republic is 'El Burrito de Belén' (The Little Donkey of Bethlehem). It tells the story of a child travelling to Bethlehem with their donkey to see the baby Jesus.